Shift of a glance (Eagle’s view)

August lies beyond the middle of the year but somehow affords a better position to see the span of the months than the end of June. I envy the Eagle that swoops where she wishes and appears to be able to look backwards and forwards in the shift of a glance and a tilt of her span. ‘Fly it all out like an eagle in a sunbeam. Ride it on out like you were a bird.’

Future gazing offers a sense of hope which wafts in on the cooler air. I don’t buy into that concept that autumn is a season of decay and I greatly prefer nature’s ‘turn to red’ hues to the pressing heat of the summer dog days which as a non-sun worshipper have, especially this year, been burning for too long.

I was recently in our family home in the French Alps. We are located half way up (and so too, halfway down) a mountain. The daytime temperature in August is hot and brings along bees, butterflies and less glamorous bugs. The night time, heralded by the quick sinking of the sun behind the western ranges brings a sharp coolness that dovetails into cold at which point the moths break out and flap towards the lights when the stillness of the evening gets too complacent.

Looking to the south one can see the continuing summer of Italy and when I turn west-by-north-west, the snow/glacier peaks remind me, without much subtlety that winter approaches. 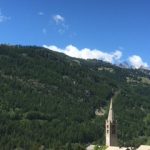 North: A glacier peaks ready for the ice

The passing of time was a topic of this brief sojourn. It came about because I was helping my brother Dan to tidy the house in an attempt to make it ready to be rented out. We have as a family been going there for 26 years and although most people have over this time only stayed for holiday length periods, there was still a considerable amount of clutter that needed moving to the figurative ‘deleted’ file.

The clutter itself was interesting and tells not only its own story but also that of whoever left it there. My mother, in whose image the house essentially is, was highly organised. We found her neatly folded bed linen in plastic bags with labels detailing the sizes and bed types they matched; ‘long single duvet’ and ‘ plain pillowslips’. A pristine double white sheet bears the red sewn initials MR.  Its provenance being my mum’s haberdasher Aunt; Millie Rom and it must be nearly 100 years old. Crockery and kitchen aids date back to the 1990’s and being unused since before my mum passed away in 2001, sit in a cupboard. Despite Daniel trying to move them around to occupy more accessible spots they remain again in the exact same and most logical and reachable position as before our ‘big clean.’ We discussed why our mother had labelled and organised to such detail but didn’t really conclude much as it was just what she had always done. We got the feeling that she wanted to facilitate all our lives through planning and her system definitely cut through the years and made their passing less violent than in the wake of the sort of mess I shall probably bequeath.

Some 4 or so years after my mum died my father began living with Ruth. Her tale is for another day but what I found of hers tells a story too and can be seen succinctly in a small pot of her L’Oreal face cream. Ruth was of small stature and intelligent. She loved art and reading books. These interests aside what really came across in the 12 years I knew her was that she really hated getting old. The small pot of cream is to this day barely used and I can imagine her taking a tiny dab, as per instructions, in order to defy the passing time. Her death, the result of pancreatic cancer was rapid and unrelenting. It was very nasty but ironically and despite her being in her 80’s the speed of the disease helped her defy time and her period as a poorly person was brief. My father, now in his 90’s fights time by looking to the future. One of his preoccupations was how he was going to transport a shoot from one of his mountain plants back to London without it suffocating in his suitcase from the fumes from his other contraband; salami and cheese.

Looking at the bees harvesting pollen from the lavender bush it amused me to think that they and he just carry on planting for the future with only a vague guarantee of inclusion within it.