Look what they’ve done to me

I cannot run I cannot hide

Late one Thursday afternoon I was doing my homework while listening to the BBC’s Radio 1. The presenter recommended I spend the evening watching Top Of The Pops as it would be having a royal feel to it and would be hosted by the American DJ Emperor Rosko and was to feature a new English band called Queen.  I cannot remember if the group actually spoke on the radio, but I was suitable impressed by the introduction to make a point of watching them perform their intriguingly named track; Seven Seas of Rhye.

Some two hours later, the TV picture went green, smoky and black, Brian May’s guitar and the Mercury piano boomed in like a stallion stampede and Freddie’s dark painted eyes, black (self-trimmed?) fringe and sallow cheeks glared as if he were Hecate, the lead witch from Macbeth. 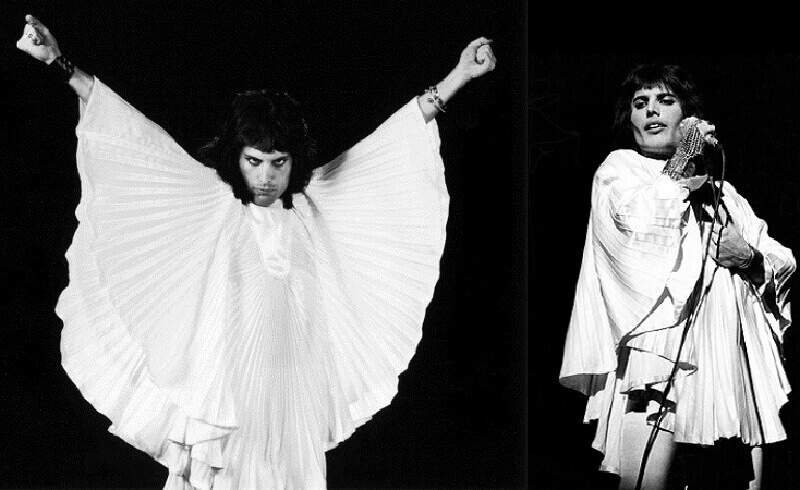 By early 1974 it felt like the world had been in a two year eternity of multi coloured clothes, spectrum hair hues and platform boots. Queen broke into view but also remained hidden in the midnight sky. They were dressed in black and white that was so stark it drew an intake of breath. Not only did Queen look sharp, but their sound was too. Even in this, their first broadly cast song the polar contrasts between a thumping rock background and the crystalline voices and sheer searing guitar stood out. Everything about Queen was shiny, clean and fresh. It appealed greatly and was enhanced by the fact that Mercury’s impact was rather scary too.

I became transfixed by Freddie in a very different way from how I had with Marc Bolan and Bowie and a major inspiration was that Queen did not become universally or immediately popular. It’s hard to grasp this idea in 2016 when nearly every TV ad-break features yet another Queen track (currently Flash for floor cleaner and It’s a Kind of Magic for naff furniture) but in the mid 70’s they were portrayed as aloof, rude and pretentious. The Black/White thing clearly marked them as different from other acts and coupled with their look, the music press just couldn’t pin them down or pigeon-hole them. Queen were elusive and this alienated them from journalists and many others. This delighted me. I was getting into a band ahead of the curve and I ‘got’ what others didn’t.

Some three years later at a Queen concert Freddie told me (and the rest of the intruders butting into my private meeting with Queen at Wembley Arena) ‘you may have read about us splitting up, but I can tell you that the music press are talking from here’ … as he pointed at his rear end.

This was in the pre-Punk era yet to my mind Freddie began as and remained the truest maverick. He had mystery and talent and an exotic ‘otherness’ which made me, as a half Italian in England begin to feel that I too could also bring some cultural capital to the table and that it had value. I loved the way he’d tell critics to hang themselves and then rammed home the point by prancing around like My Little Pony in shiny black spray-on slacks. His irony and masks were beautiful and nobody could tell what was what with him.

My other (rock) heroes, including artists from other fields, taught me that individuality is an asset and that it’s good to stand out from the crowd, but it was Mercury who showed that if you follow your instincts you can also develop a thicker skin.  Queen’s rise to fame was the first that I could not just witness but contribute to too and as a nailed-on Queen fan I was honoured to be recipient of bile from detractors and critics who took offence at the band.  Weirdly this inspired me. I loved their music, I loved the infamy and realised that being connected to something that divides opinion helped me to increase my self-belief and self-esteem.

As for Freddie and the band, their journey has been well documented. I guess the higher you raise your head above the parapet, the more of your torso can aimed at but even though they had real ups and downs by the early 1980’s they had built a legacy. Full torso or top of the scalp, it didn’t matter where the missiles landed the their point was proven.

Another tremendous lesson that Freddie taught us was that if you want to prove yourself as a creative person, attention to detail and minutiae are key. In an interview (you can find it on YouTube) Freddie talked about the hours and days it took to produce the backing vocals for Queen’s 1976 song Somebody To Love. He described how the other group members would get bored from constantly repeating short vocal bursts that were being knitted into a highly complex arrangement yet he’d give them a biscuit or some other distraction when they complained too much.

I am convinced that it is detail that sets very successful people apart from the rest. Even if the resulting song, equation, sculpture, tunnel or blog looks simple and refined, it is likely that much detail and deep testing was used on the way. One of the reasons why Queen’s music is so enduring is that they invested so much time on small things that even now if you listen to a song such as The Fairy Feller’s Master Stroke from Queen II there are tiny chimes and bells that seem new even after 45 years.

‘The Ostler stands with his hands on his knees, come on Mr Feller crack it open if you please..’ from Richard Dadd’s painting

It is now 25 years since Freddie died and it’s taken me this long to be able to obtain a perspective on somebody I never met and whose lifestyle, values and talents were so different to my own.  The connection was purely one way; he created it and I bought it. But I also feel there is a more ethereal contact and this is where he was so good, because so many people around the world feel the same as me. They also connect to Fred because they feel different from their peers and know that the man whose professional career was invested in entertaining millions was also invested in hiding his real self.

Top performers in most spheres encounter negative criticism and those of us who don’t have a public profile should be grateful for our zero-pain anonymity.

← Dancing on the Jetty Walls of Malaga →